Giant Hogweed originates from the Caucus Mountains in South West Asia. It was introduced into gardens as a monumental curiosity in the early 1800’s and deliberately planted near rivers and ponds, to enhance their aesthetic appeal. It was first recorded in the wild in 1828, in Cambridgeshire, in the United Kingdom. Aptly named “giant”, this umbellifer is a member of the cow-parsley family. It has flowering stems that are typically 2 to 3m in height, and bears flowers up to 800mm in diameter. Its basal leaves are often more than 1m in size. 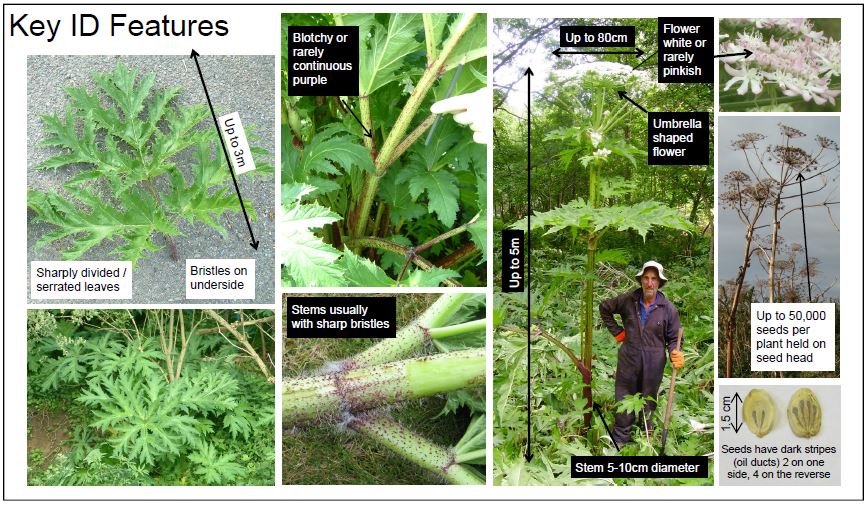 Giant Hogweed has been spreading rapidly and is especially abundant by lowland streams and rivers, but also occurs widely on waste ground, in rough pastures and woodlands. It grows on moist fertile soils, especially along river banks, is a vigorous competitor, and produces pure stands which exclude native vegetation and hinder anglers. It achieves its greatest stature when growing in partial shade. The sap of the Giant Hogweed is particularly dangerous and causes light sensitivity to the skin and severe blistering, which can last for many years. Giant Hogweed reproduces entirely by seeds, with each plant producing up to 50,000 seeds at maturity, which are then dispersed, principally by wind, water and human activity.