There are two species of Giant Rhubarb listed in the Third Schedule of the 2011 Regulations, the former originating in Southern South America and the latter from Brazil. Both plants were introduced to the UK as garden ornamentals in the mid 1800’s and were widely promoted as architectural herbs for planting around ponds and in damp areas. However, the Giant Rhubarb’s large stature quickly outgrew all but the largest gardens and estates, and it had become established in the wild in the UK by 1908, and had escaped into the wild in Ireland by 1939. 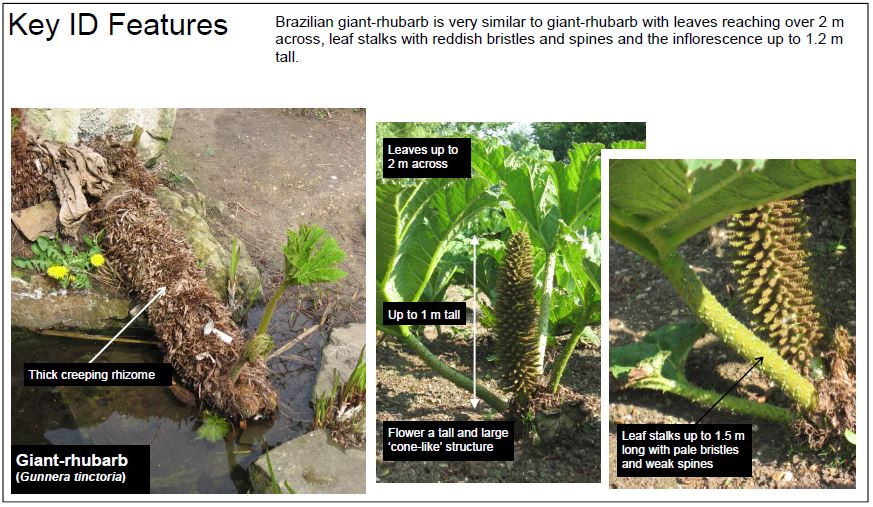 Gunnera tinctoria has become particularly well established and problematic in the West of Ireland. It seeks out a range of sunny and partly shaded, sheltered habitats on permanently wet soils and grows best in temperate areas with high rainfall. Giant Rhubarb is a fast-growing, clump forming, perennial herb, which can grow over 2m in height and has huge leathery leaves on thick stalks arising from a stout scaly rhizome. It forms dense clumps which outcompete native vegetation, disrupt ecosystems and halt natural succession. It can also contribute to local flooding by blocking drains and streams, and can dominate large tracts of agricultural land. Each plant is capable of producing up to 250,000 seeds every year which are then distributed by birds, water and human activity.