Himalayan Balsam originates from the Indian Subcontinent, where it is native to the western and central Himalaya. The plant was introduced to Kew Gardens in 1839 by Dr. Royle from Kashmir. Its first record of naturalisation in the wild was in Hertfordshire and Middlesex, in the United Kingdom, in 1855. Since then, Himalayan Balsam has become a major weed problem, especially on riverbanks and waste land, and can also invade gardens. It grows rapidly and spreads easily, and is now widespread across northern Europe and Scandinavia, where it has reached pest status in many countries. 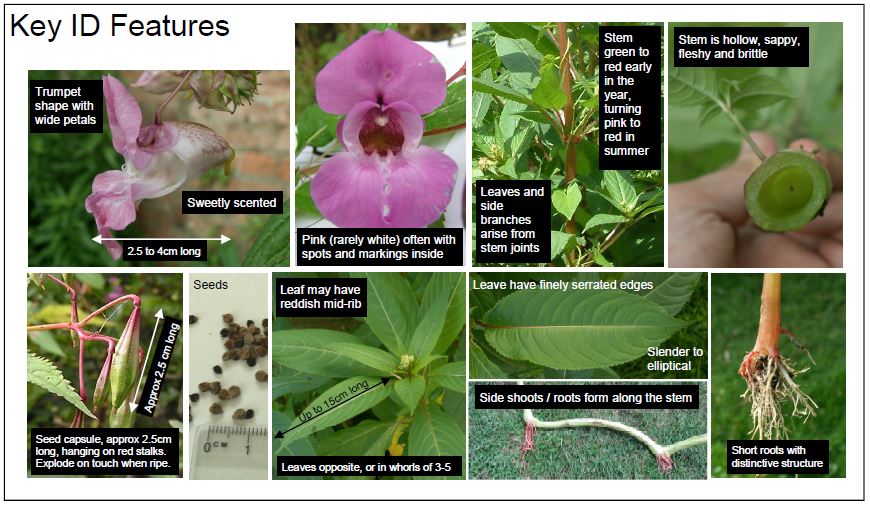 Himalayan Balsam is an annual herb with stout succulent hollow stems which grow up to 2.5m. Its leaves are opposite or in whorls of 3 to 5, and it has a helmeted flower which is deep purplish-pink to white, and gives off a strong balsam smell. The plant is well established and extremely invasive, likes moist and semi-shaded damp places, particularly along the banks of slow-moving waterbodies, where it forms extensive monoculture stands to the exclusion of other plants. It mainly spreads via its floating seeds, which are dispersed by its explosive fruit capsule, with each plant capable of ejecting up to 800 seeds for a distance up to 7m. In addition, its attraction to pollinating insects could be to the detriment of our native plant species.